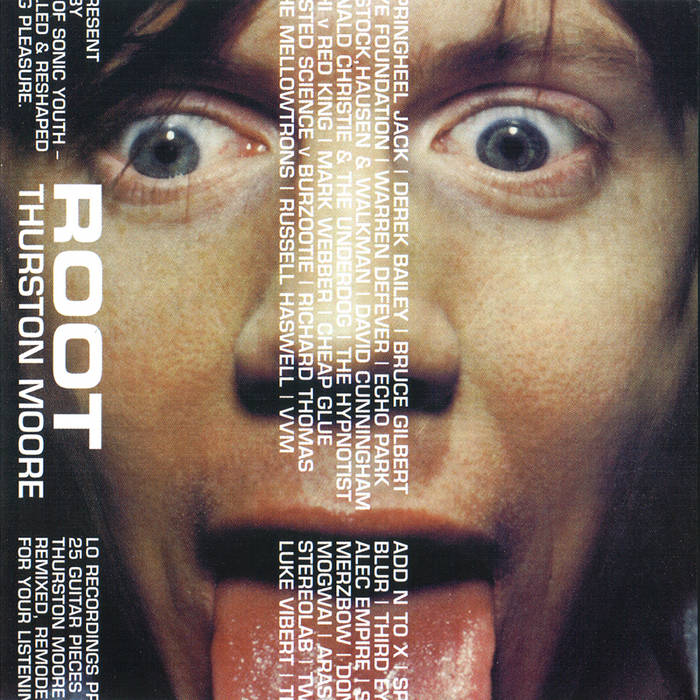 Perhaps Lo Recordings most ambitious project. It started when Jon Tye met Thurston Moore backstage at a ‘Nuclear Jam’ event that featured Moore and Lee Renaldo alongside luminaries from the free jazz scene including Lol Coxhill who featured on the ‘Collaborations’ album. Tye gave Moore a copy of the album and asked if he would be interested in contributing to a future Lo project. Moore kindly agreed and said ‘here’s my fax number, if you don’t hear from me you can hassle me’.

Some time and many faxes later a DAT tape containing 30 one minute guitar pieces arrived. Initially this was to be used as the starting point for a collaboration with drum and bass producer Boymerang. When this failed to materialise a plan was hatched along with Keith Ball from The Commercial Gallery to send copies of an individual piece (on DAT or one minute cassette tapes) to a selection of artists and musicians. Inspired by the phrase ‘nothing exists in a vacuum’ designer Jon Forss suggested sending the tapes out in screenprinted Hoover bags.

The bags were sent out to around 100 people to create a new piece of music or artwork inspired by the original piece. The results were then released on CD, as a limited edition CD in a numbered Hoover bag (of which only 2000 were created) and as a 5 piece vinyl box set featuring music by a wide range of artists including Derek Bailey, Blur, Alec Empire, Merzbow, Stereolab and Bruce Gilbert.

There was also an exhibition held at the Chisenhale Gallery in London which featured work by Angela Bulloch, David Bowie, Gavin Turk and many others.

Though no tracklisting comes with the album, just a list of the track contributors, some titles have come out in interviews with those involved.